The citizens’ campaign encourages Finns to take energy-saving actions to ensure energy for us all.

An extensive energy-saving campaign was launched in the fall of 2022 with Motiva, the Energy Authority, the Ministry of Economic Affairs and Employment of Finland, the Ministry of the Environment, the Prime Minister’s Office, and the Finnish Innovation Fund Sitra. Its purpose is to advise citizens on practical energy-saving actions and to balance consumption peaks now and in the future.

The campaign’s target group is all Finns and those who live in Finland.

In addition to climate change, the campaign’s background is particularly affected by Russia’s war of aggression against Ukraine, whose consequences on the energy market are evident in Finn’s everyday lives and wallets. Short- and long-term energy-saving actions require changes in the behavior of all Finns and increasing awareness of the subject. How to get as many people as possible excited about reducing energy consumption? What would touch my heart so profoundly that I’d have to take action? How to pass information in such a concrete and motivating way that people are receptive and, above all, adopt the desired new habits?

The fact that a serious story is built almost daily in the media also by others brought its challenge – the campaign should focus its resources on being solution-oriented. 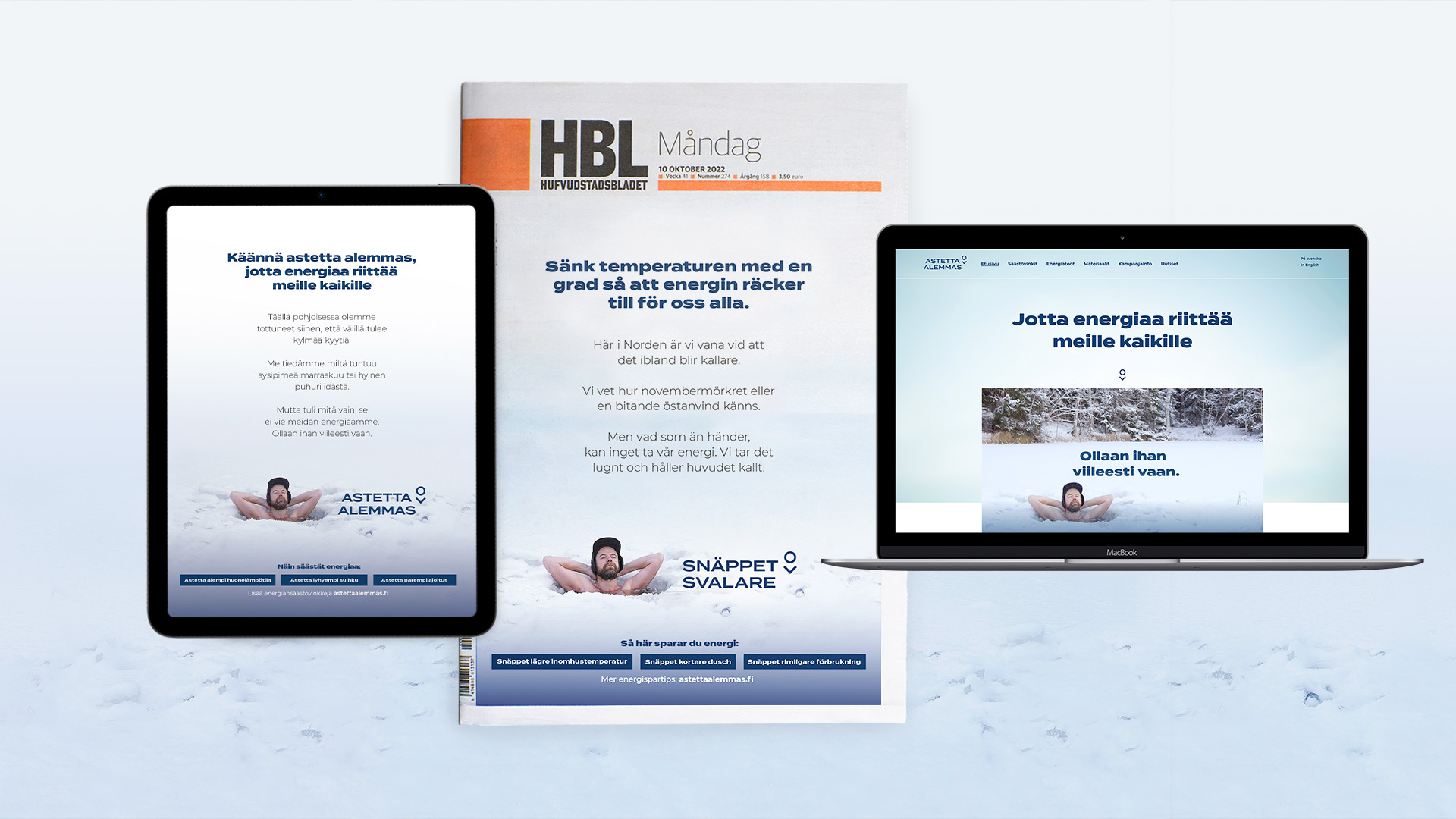 We created a unified communication and marketing concept, which is summed up in the “Down a Degree” message and logo. The main message was “Down a Degree. To ensure energy for us all”. At the campaign’s core is a touching and meaning-creating concept story and the most important elements of the visual appearance. The most important task of the campaign is to make people believe in the meaning of their actions and to offer easy ways so they can give their effort. Easy-to-implement, rational and everyday actions, such as a degree cooler room temperature, a degree shorter shower and a degree better timing became an important part. The topic is serious, but we didn’t want to scare Finns more, just to encourage them with a little twinkle in the eye.

To maximize the impact, we also wanted to build a collective team spirit. We invited organizations, communities, and companies to participate in joint discussions to think about what they could do in their everyday lives. To maintain consistency, we created a freely available material package.

We Finns are tough and tolerate the cold from the east very well. Together we can overcome this difficulty as well. The functional significance of the citizens’ campaign is wrapped around the goal of getting 95 % of Finns or people living in Finland to do any action to save energy. The actions of a person matter. Even a little awareness and the smallest energy act help us towards greater social significance, i.e., more self-sufficient energy production, and sustainable use. The size of the campaign and its relevance can’t be overemphasized: to ensure energy for us all.